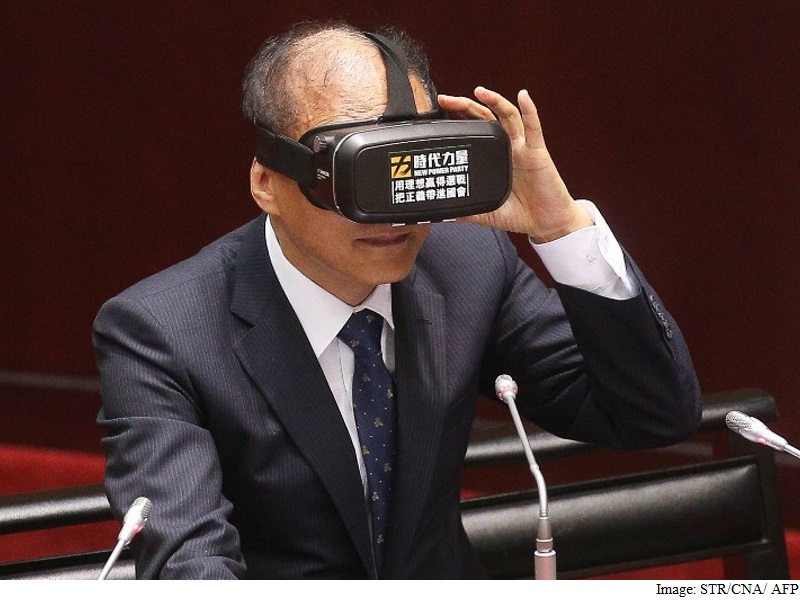 Taiwan’s premier donned virtual reality goggles in parliament Friday to discuss the future of the island’s tech industry in what looked like a debate between robots.

Both then discussed the challenges for Taiwan’s key tech industry, which is looking to virtual reality to breathe new life into the sector.

With straight faces, the pair debated for five minutes wearing the futuristic visors.

Huang said he wanted to highlight the difficulties ahead for Taiwan as a manufacturer for global brands.

“It’s time for Taiwan’s industries to transform, and I think one of the directions is VR,” he said in a question and answer session.

Lin replied that his government was seeking to turn Taiwan which is focused on automation, Internet and artificial intelligence into Asia’s Silicon Valley.

While some virtual reality goggles transport wearers into other worlds, these two had their feet firmly on the ground.

All they could see was a cartoon graphic made by the NPP which said young people could “hardly survive” due to low salaries.

Huang asked Lin to press the “yes” button on his goggles if he agreed, which he did.

Virtual reality is the buzz industry at this week’s Computex tech fair in Taipei, with major brands including Taiwanese smartphone maker HTC displaying their headsets.

Acer Inc., a leading Taiwanese PC maker, has also branched out into the field, joining forces with Swedish game studio Starbreeze to develop a high-end VR headset designed for arcades and theme parks.

How to revive Taiwan’s sluggish economy is top of the agenda for the new Democratic Progressive Party government, which was sworn in last month.