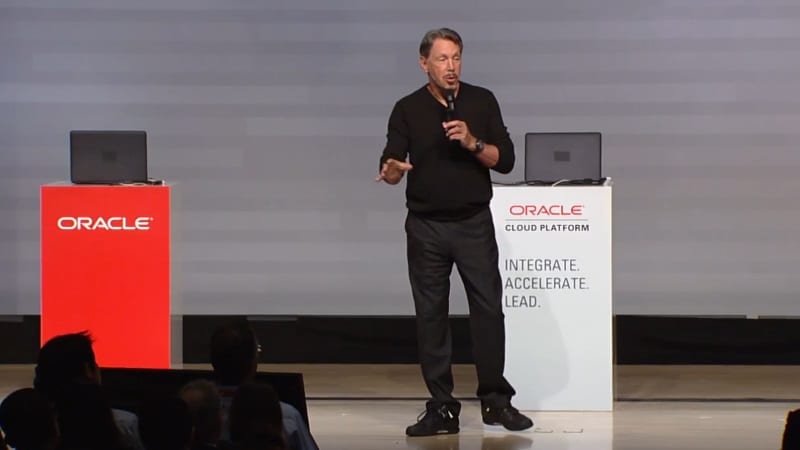 The company announced [email protected], which puts the same hardware and software Oracle uses in its data centers in the customers’ own facilities, Executive Chairman Larry Ellison said Sunday during a presentation at Oracle OpenWorld in San Francisco. Customers who get the gear in-house won’t need to buy the technology; instead, they can subscribe to the service on a monthly basis, just like they would if they were buying from a distant cloud-computing site. He also announced what he said were more powerful products at a lower cost than those from Amazon, the leading public cloud provider and Oracle’s No. 1 competitor in infrastructure.

“Amazon’s lead is over,” Ellison said. “Amazon’s going to have serious competition.”

Oracle is stepping up efforts in cloud-based technology, rolling out new products and making acquisitions to woo businesses that prefer to buy computing, networking and storage capabilities via networks from large providers. Amazon, which helped pioneer the market known as the public cloud, has grabbed the attention of startups and corporations around the world, an effort that’s also put it in competition with Microsoft Corp. and Google.

“Oracle is going to be a major player in the cloud – the size of its existing customer base gives it a great opportunity,” Al Hilwa, an analyst at IDC, said in an email. “In terms of market leadership, I think we will have to watch how fast Oracle can crank growth and specifically investment in infrastructure to really get ahead of the competition.”

The new [email protected] program will be managed by Oracle. The service will act as an alternative to moving everything to the cloud right away or keeping everything in-house, Ellison said.

“We’ll put that part of the Oracle cloud behind your firewall, where it’s more protected and adheres to certain statutory requirements,” he said. “The [email protected] machines are identical.”

During Ellison’s presentation, which stretched for more than an hour, he unveiled several new services that touched on areas including databases and programming methods. It even included a demonstration for a new ChatBot platform that integrates with Facebook’s Messenger application. Still, cloud was a key focus – including details about its fresh approach to infrastructure that’s built for speed and availability, Ellison said.

“Oracle has established a thoughtful foundation,” Chad Eschinger, an analyst at Gartner, said in an email. “We need to keep in mind that it’s years behind but able to leverage new technology and years of lessons learned enabling it to ramp much more quickly.”

“Palerra offers a unique combination of visibility into cloud usage, data security, user behavior analytics, and security configuration, with automated incident responses,” the company said on its website. “Customers can respond to cloud security incidents in real-time, protecting sensitive company data and workloads across all of the leading cloud services.”

At the presentation, Ellison talked up the importance of artificial intelligence, including machine learning, as Oracle introduces tools that use the technology. He said his customers benefit from the massive database built up over the years, comparing it with Facebook’s trove of user information.

Oracle also unveiled its strategy for key cloud offerings – including finance and human resources – that blend third-party data with real-time analytics and behavioral inputs to create software that adapts and learns. The result is applications that automatically offer individualized recommended actions, Oracle said.