In a warm, lush environment near a meandering river 79.5 million years ago in Montana, a dinosaur nicknamed “Superduck” munched on leaves and kept a lookout for predators related to Tyrannosaurus rex that might threaten its herd.

Scientists on Wednesday announced the discovery of fossils of the dinosaur they named Probrachylophosaurus bergei that was about 30 feet (9 metres) long, weighed more than 5 tons and donned a small, triangular bony crest atop its skull.

It was a member of a plant-eating group called duck-billed dinosaurs, known for beaks resembling a duck’s bill, common during the latter part of the Cretaceous Period.

Many duck-billed dinosaurs boasted head crests of various shapes and sizes. Probrachylophosaurus, one of the earliest with a prominent crest, offers insight into the evolution of these features, the researchers said. 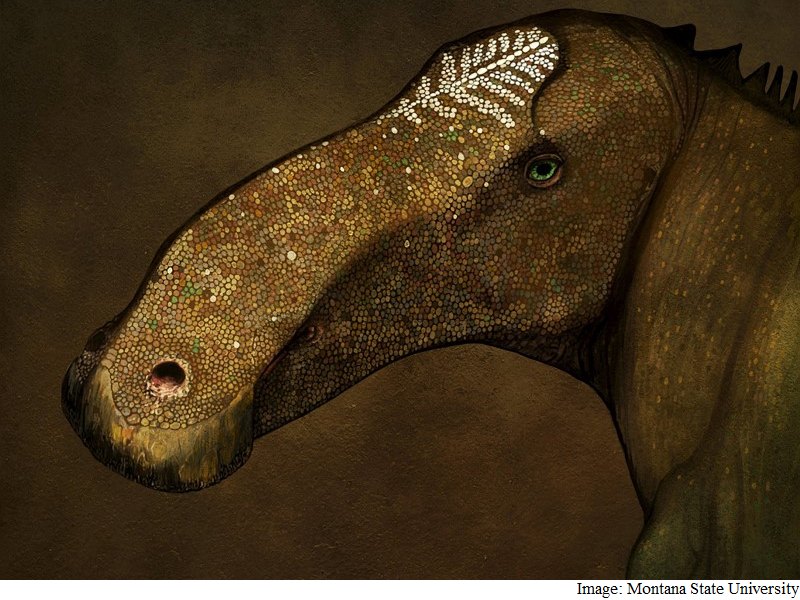 “Acristavus does not have a crest. The top of its skull is flat. Brachylophosaurus has a large, flat, paddle-shaped crest that completely covers the back of the top of its skull,” said Elizabeth Freedman Fowler, curator of paleontology at the Great Plains DinosaurMuseum in Malta, Montana.

“It is a perfect example of evolution within a single lineage of dinosaurs over millions of years.”

Paleontologist Jack Horner of Montana State University and the Museum of the Rockies added, “Because the fossil record is very spotty and we only get glimpses of evolutionary trends, it is always exciting to find evidence of transitional species.”

Freedman Fowler said she gave Probrachylophosaurus (pronounced pro-BRAH-KEE-loh-foh-saw-rus) the nickname “Superduck” because it was pretty big for a duck-billed dinosaur, although not the largest.

“We think that the crests of dinosaurs were visual signals so that they could recognize members of their own species, and also tell whether the animal was mature or not,” Freedman Fowler said.

The scientists unearthed most of its skull, its pelvis, hind legs, vertebrae and ribs near the north-central Montana town of Rudyard. They unearthed less-complete remains of a second Probrachylophosaurus, more of an adolescent in age.